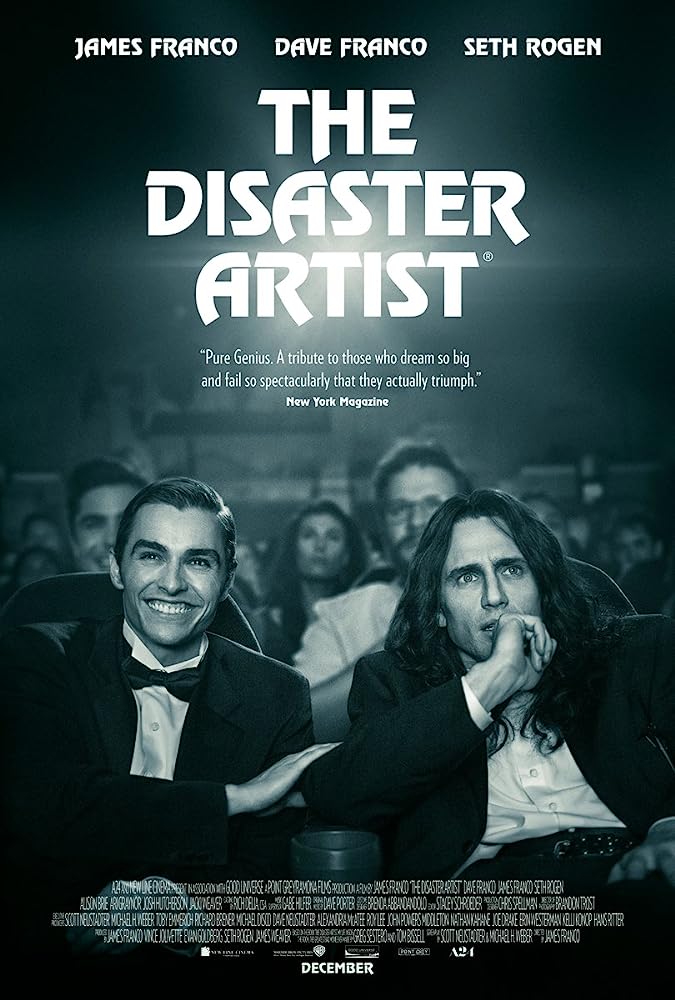 After Tommy Wiseau’s The Room became a cult phenomenon across the globe, it was only a matter of time when a comedy duo would decide to make a hilarious biopic about Tommy and his friend, Greg Sestero. Tommy and Greg teamed up at acting school in the late nineties and became close friends. Together they shared one attribute, their inability to make it in Hollywood. So naturally, they decided to make their own movie. Tommy Wiseau wrote the script, directed and starred in the film, while Greg co-starred. Their movie, The Room, became one of the most fundamentally broken films of all time, making it utterly hilarious, wildly entertaining and endlessly quotable. It became almost like a right of passage for movie lovers.

James Franco directs and stars in The Disaster Artist, the hilarious comedy that tells us the story of how Tommy and Greg became famous through their god-awful attempt at a drama (even though Tommy now claims it was meant to be funny). Although, The Disaster Artist does not make fun of Tommy, but rather shows us a story about following your dreams no matter what. Even though Tommy’s audiences did not react the way he wanted, he is still making people laugh to this day.

The best part of this film is Franco’s performance as Tommy Wiseau, mimicking his exact unique personality. Franco directs a movie of people making a movie, and Franco’s performance during these scenes are exactly on par with the bizarre scenes from The Room. Wiseau’s strange behavior, odd accent, and his determination to never give up, are perfectly matched by James Franco, making this his greatest performance since playing Aaron Ralston in 127 Hours.

However, it would be wrong to go on without mentioning Dave Franco as Greg Sestero, the more underrated performance in this film. As Wiseau’s best friend, Greg plays an integral part in the making of The Room, but as the shooting continues on, he slowly begins the realize that the film is going to be a total disaster. Dave Franco shows us this perfectly and gives us a superb character arc that the film needs.

The Disaster Artist is filled with laughter and heart, but still lacks the realism of the concept. While the Franco brothers’ performances are very immersive, we don’t get the full scope of the making of The Room as we only get short peeks of the other pivotal characters. How great would it have been to see more about the woman playing Claudette, (Jacki Weaver) or Lisa (Ari Graynor) or Chris-R (Zac Efron)? While we see some of their most well-known scenes being acted out, to follow these characters a bit more would have made the experience much more entertaining. However, to be fair, this is coming from someone who is an avid watcher of the cult classic since high school. For viewers who haven’t seen The Room, there will be less complaints.

The film is clearly designed to be funny, while still being a touching story about following your dreams. It does just that, but seems to lack the right amount of dramatic elements that would make us feel more sympathetic for Tommy and his dream. This is not to say we don’t feel anything for him, but the film could have said more and given us more emotions than it did. Given that however, this movie still works perfectly as a hilarious comedy that shows us the fake, but completely realistic behind the scenes making of the best worst movie ever made.

Rated R for language throughout and some sexuality/nudity