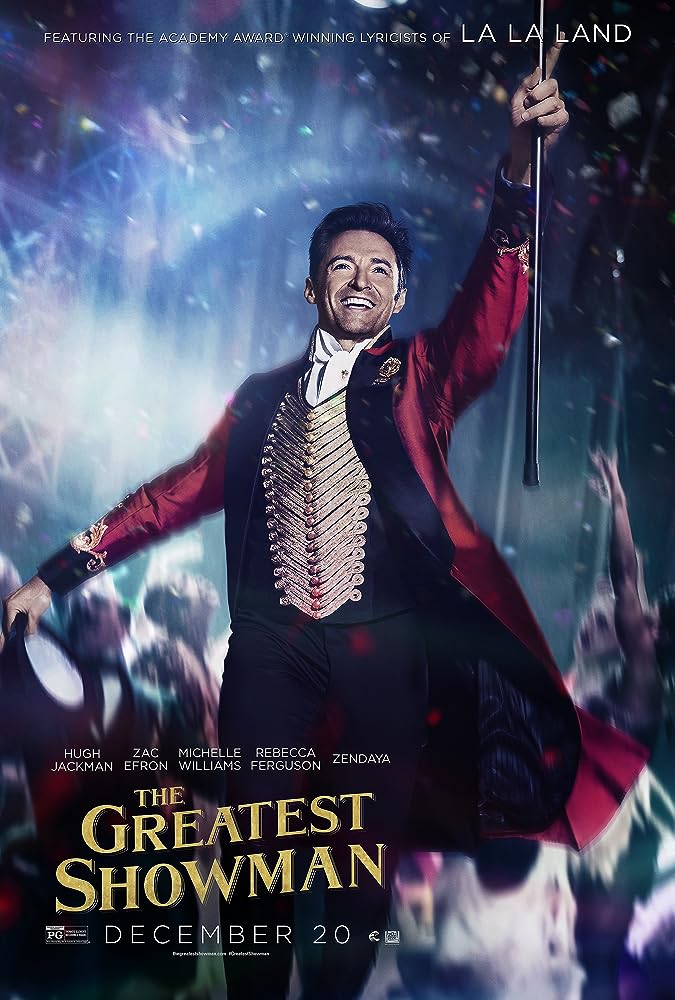 Hugh Jackman has shown us how diverse he can be in his roles, especially these past few years. Last March he starred in Logan as an incredibly angry mutant looking for vengeance, and now he stars as P.T Barnum, a highly ecstatic man who rose to fame by creating a team of unusual individuals to perform in a circus show. He gets together a bearded lady, an unusually large man, an unusually small man, and many others to sing, dance and perform in front of an audience. Criticism comes quick as Barnum is accused of exposing their “weirdness” to the public, and angry mobs form to protest these individuals’ rights to be shown in public. However, they don’t let that stand in their way as they perform and bring their passion forward for all to see.

The performances are great with Hugh Jackman as the lead role, stealing the show. In addition to the obvious star however, we have Michelle Williams (Manchester by the Sea, Blue Valentine) as Charity Barnum, P. T’s wife. Her role as a caring wife and mother shines through her sensational performance and shows us that she will continue to be talented throughout her entire acting career.

In addition to the performances, the musical numbers are what brought this show to life. With Benj Pasek and Justin Paul, the same songwriters for La La Land, you know the music is going to be great. The choreography along with the motivational musical numbers is outstanding and all of the actors do an amazing job at being synched together. There is not much else to say about the music and the choreography, other than how fantastically well done it is. The only issue with some of these scenes is the blatant choppy editing. Editing musical numbers can be difficult, but the way it cuts here, makes it obvious that you’re watching a movie, and destroys the feel of getting lost in it.

However, the film works great as a fun musical but not as a plot-driven film. The entire movie is incredibly rushed, leaving out the sense of wonder and appreciation that director is going for. Within the first twenty minutes of the film, Barnum already has his team ready to go, and they’re also already experts in singing and dancing. We’re left wondering how they got to their peak in terms of talent, but instead we skip that and just focus on great songs. Don’t get me wrong, the music is the best part of this film, but we need a focused storyline to go with it.

We don’t get to know many of the characters very well except for Barnum. The movie refuses to let us know more about the individuals starring in the show, along with Philip Carlyle (Zach Efron), the show’s co-producer. There is a relationship between him and another character that is given no depth and we’re left wanting to know more.

The film is full of holes that need to be filled, but the film isn’t completely ruined either. The music, the performance and the choreography, leave viewers happily satisfied even though the film had much room for improvement.

Rated PG for thematic elements including a brawl