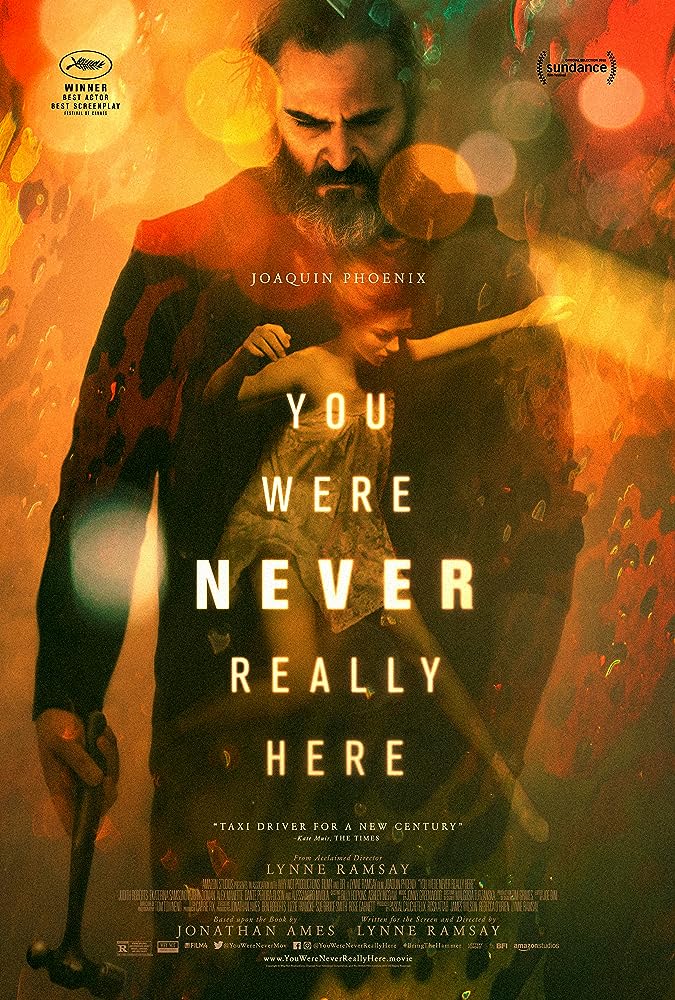 This new psychological dark thriller starring Joaquin Phoenix is already one of the best films of the year. Directed by Lynne Ramsay (We Need to Talk About Kevin), the film is about a traumatized veteran who tracks down lost girls. When a high-profile governor’s daughter goes missing, it’s Joe’s job to locate the young girl and bring her back to her father. However, the task is a bit more daunting than his previous ones, and it will either lead to success or his untimely death. He goes forward with this task, even while battling his distressing hallucinations and tormenting memories of his past.

The film is incredibly dark and disturbing, yet undeniably thrilling. From the beginning of the film, we are shown quick flash backs to an incident in Joe’s childhood, an incident that explains why he is who he is and why he does what he does. Joe lives at home with his elderly mother, taking care of her. When he’s not being the attentive son, his persona switches right back to brutal and ruthless. Joe is almost like an anti-hero, someone we root for, but isn’t necessarily a good guy. Much like Tony in The Sopranos or Walter White in Breaking Bad. However, it would be pretty difficult for film buffs not to see the similarities between him and Travis Bickle from the classic Martin Scorsese film Taxi Driver. The film has blatant similarities with that film, while not stealing anything from it. In particular, Joe is much like Travis as he has psychological issues, is disgusted with society, and goes on a mission to rescue an underage girl.

Joaquin Phoenix’s performance in You Were Never Really Here is without a doubt one of his best to date. It is right up there with his performances in The Master, Inherent Vice, and Her. Here, he gives us this deeply troubled protagonist with various hidden layers, something that many cannot do. If there is one reason to see this film, its for Joaquin.

Again, while this film is superbly well-made, it is definitely not for everyone. The dark atmosphere, disturbing characters and behaviors, disheartening tone, and unnerving score is enough to turn plenty of people away. You have to be okay with this type of film before going to see it. While it has a plot that is not far away from the action-packed thriller, Taken, it really is nothing like the film at all. The film acts more like a dark case study than a thriller. There are plenty of times while you’ll find yourself on the edge of your seat, but it is usually out of anxiety or nervousness.

That said, the film is incredibly well done, with magnificent performances. It’s dark, disturbing and leaves a profound psychological impact that can be felt for hours after viewing.

Most Distressing Moment: Every hallucination Joe has