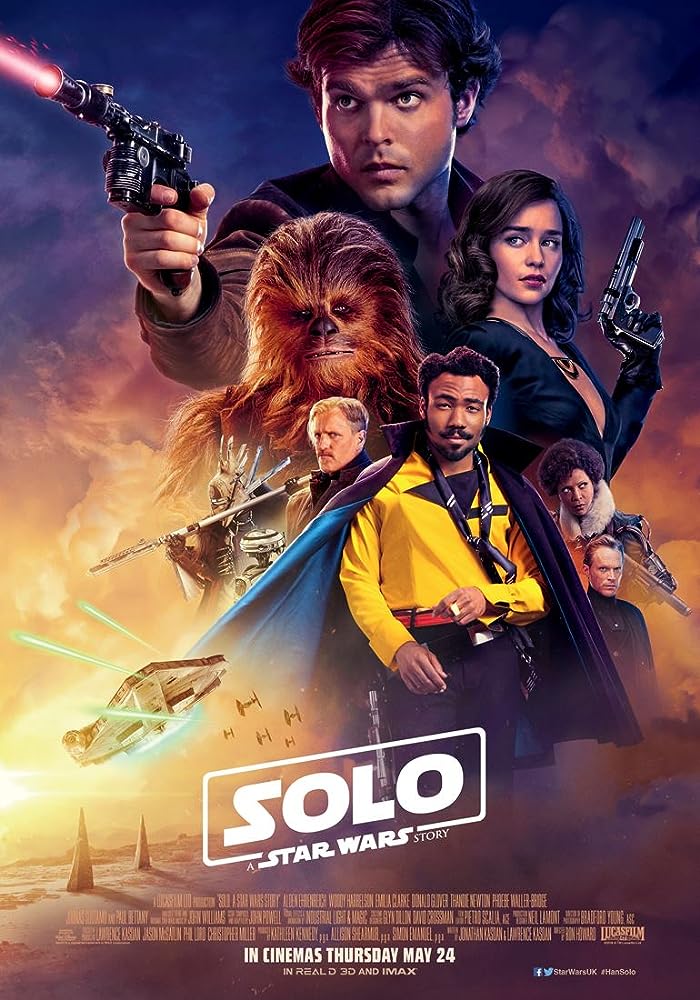 Han Solo has been one of the leading icons of the Star Wars franchise since the release of Star Wars: A New Hope” in 1977. The idea of a singular film about the origin of Han Solo was only a matter of time after the recent release of both “The Force Awakens” and “The Last Jedi”. “Solo: A Star Wars Story” is separate from any of the trilogies and acts as a standalone film just as “Rogue One: A Star Wars Story”. Directed by legendary filmmaker Ron Howard, the film gives us a unique glimpse into Han’s past and shows us what exactly made him who he was.

Han Solo (Alden Ehrenreich) and his love interest, Qi’ra (Emilia Clarke) have been trapped on a crime filled planet Corellia that endangers their lives. They make it their mission to escape only to then become separated. Solo then finds himself entangled in a life of crime due to the demands of an intimidating crime boss named Dryden Vos. They must bring back a large amount of Coaxium, also known as hyperfuel. He goes on this adventure alongside new friends, some that become vital to the entire Star Wars franchise. This includes Chewbacca, the other and possibly larger reason Star Wars fans will go see the film. “Solo: A Star Wars Story” gives us insight into Han’s friendship with Chewy, the origin of his name, how he met Lando, and most importantly, how he came to be involved in the smuggling life.

What will likely satisfy most are the constant homages to the original Star Wars films. Ehrenreich’s performance in particular reminds us of Han’s wit and charm from the original series. Ehrenreich has Solo’s mannerism and body language down perfectly, making a perfect reason for Solo fans to find little to complain about. Donald Glover plays Lando, the self-absorbed, smoothing talking smuggler who originally appeared in “Star Wars: The Empire Strikes Back”. He too managed to ace the mannerisms and personality of Billy Dee Williams’s Lando.

The other very notable performance in “Solo: A Star Wars Story” is Emilia Clarke’s performance as Qi’ra. Qi’ra has multiple layers to her character and Clarke’s outstanding performance keeps the viewer thinking about her and her motives. The film also stars Woody Harrelson as Beckett, Thandie Newton as Val, Paul Bettany as Dryden Vos, and Phoebe Waller-Bridge as L3-37. Every performance is as convincing as the last, keeping the film just as fun and thrilling as it is engaging.

Ron Howard’s direction is unique and original, giving the Star Wars movie something to keep itself standing out from the other surrounding films in the franchise. This film proves how huge the continuing franchise can be, showing how it very rarely loses its steam (excluding the infamous prequel trilogy). Howard’s vision is without a doubt, very creative. From the beginning till the end, there are numerous amounts of different creatures and droids, who all look and sound uniquely different. There was clearly a lot of thought put into the appearance of this film, that it can’t be overlooked. The production design is immersive and stunning which again, reminds fans of the original series.

The action is fun and engaging as well. It keeps plenty of viewers on the edge of their seats. However, it isn’t necessarily the action itself that is responsible for that. The film makes us care about the characters and when they are in peril, we can’t help but stare at the screen even though we really know that at least Han, Chewy and Lando end up a-ok.

“Solo: A Star Wars Story” is a great film for both fans and moviegoers alike. It fills the need for action, thrill and comedy, while pleasing fans with the characters and production design. As one of the better films in the franchise (at least of the newer films), this one will stand out for plenty of years to come.